"Worries, sweetheart, don't let your worries consume you," I can hear that voice saying. The soft eyes, the big hands, the gentle arms. The voice, though, there are a few voices. I hear them all; yes, I can still see them. I remember the comfort that they used to give, and now I see I'm left with nothing. Well, I'm not at great need, you know. We remained this way for a while, as if there were a silent communication passing between us, as if time itself had hesitated its continuous flow in order to allow such an exchange.

Hours that I could've spent doing something productive (worrying my head off, to be exact) were wasted on fantasy (still are, but without motion.) There are too many of my friends in trouble, these days. Not trouble, more like turmoil. I wish I could fix it, change it, consume it for them. All I can do is worry, now, because I no longer see them. I wonder, have they ever worried about someone else? Do they know that they're being worried about? Hmm?

First we have the Assholeparade live 10". Why should I convince you to buy this at all? Well its a live recording from when they played Germany. Recorded off the soundboard and then premastered and mastered down to vinyl at Lucky Lacquers to make it sound crystal clear. Gold foil stamped covers, limited pink copies. This isn't just a lofi crappy live recording, this might even sound better than the actual show did!

Next is the new Charogne Stone EP. I've only sold one of these in the two weeks I've had this, think people don't know this is out. French straight-edge powerviolence (I think its more like superfast punk violence). Best record of theirs I've heard yet. Pretty rad packaging and pretty vinyl.

Conga Fury/Shitstorm split repress is fresh in here. Sold through the first 500 copies like it was free money. All copies are on the weird gray marbled or purpley marbled vinyl. Conga Fury is crazy spastic noise punk hailing from Japan. Shitstorm is furious grindcore from Miami, this is their first and to this date only recording with Eric playing bass on it. 500 more copies and then this thing will be gone forever.

Last and definitely not least is the Magnum Force EP. This record kills everything. Grindcore very much ala Magrudergrind. Also this is the first TLAL release to come with a download code, DIY style. Super heavy covers, all on black vinyl, real grind form AZ. Do yourself a favor on this one.

Ripping, crushing, gnarling angular powerviolence with distinct hardcore and punk influences. Twenty minutes of music to dispel all the annoyances in your life. The music matches the artwork.. the moment you plunge your needle into this record you're whisked away to another place filled with slinky demons and cachinnating skulls. Sick/Tired is ex MK-ULTRA and WEEKEND NACHOS. You will not be disappointed.

Once you think you know a band, something like this comes along. Don't get me wrong, there is still tight whirlwind blasting from these Boise boys, but what fastcore release have you ever heard of that has twenty two songs in thirty minutes? HOD has development full songs for this offering and they have really created complete album. The band's 5" and 7" really display tight drumming and amazing skill between quite a large number of songs, but this release is fully orchestrated... they even slow down and play mid-paced parts in this! The entire release never stops for a second; for fans of THE NEOS, LARM, D.R.I., NO COMMENT, and CROSSED OUT. Exclusive to this CD is bonus enhanced CD material including but not limited to a live video from their set at the Gilman Speed Trials.

A full hour of eye blurring, mind thrashing, face ripping fastcore, this CD is a discography of everything so far. 99 tracks from their splits with NOCOMPLY, SU19B, DEAD RADICAL, their Disgrace the Corpse of Eric Wood 7", comp tracks from Trapped in the Scene, as well as various demo tracks and awesome live tracks! LÄRM, THE NEOS, and NO COMMENT shed a tear as blood trickles from your ears after listening to this beast.
Buy now here

The bubonic plague has returned to this generation. Social structure has become irrevocably changed and pandemonium has ensued. The carrier this time was not rats. No. This time the virus has been carried off ships on this morbid slab of vinyl, infecting millions. The MESRINE strain comes directly from Canada. Inhabiting the neutral country for more than a decade. It has been spreading across the US and Europe. Brutal blasting blows to anyone who has encountered this. The newer strain is P.L.F.. Equally as volatile, P.L.F. delivers instant nausea to anyone infected. Delivers grinding headaches and will thrash one's body leaving bruises all over. People infected with either should immediately buy this record and continue doses for as long as they have symptoms. All is not lost. Killer artwork by Matt Gauck.
Buy now here

More info on all releases at:
HTTP://WWW.TOLIVEALIE.COM 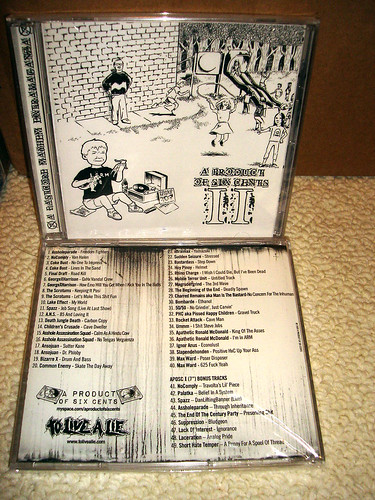